What is a non-executive director? 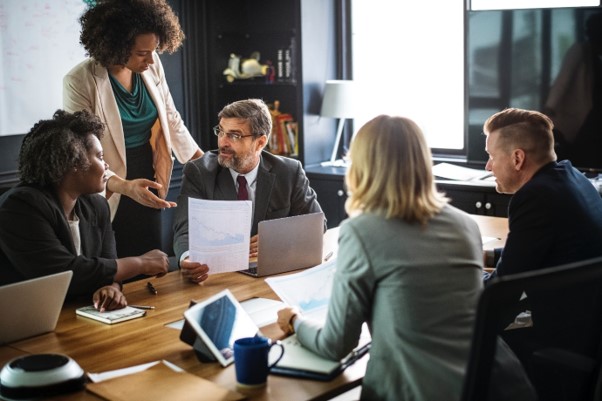 In this guide, we’ll take a closer look at these kinds of roles, and discuss what candidates need to think about before going down the non-executive route. We’ll cover:

What is a non-executive director? How are they different?

A non-executive director is an experienced professional who provides independent strategic advice, guidance, and insight for the executive and senior members on the board of a company. Sometimes also called ‘external directors’, it’s their job to bring impartiality and independent oversight to board meetings.

While a NED does receive remuneration for their services, they aren’t considered employees, and don’t oversee the day-to-day operations or management of the business. To ensure complete impartiality, it’s also important they have not been employed there previously or had any other interests in the business prior to joining the board as a non-executive.

It’s this degree of independence that makes NEDs such a valuable asset to the leadership team. They’re not directly employed by the company in the same way as an executive director, which means they often bring a much needed outside perspective to meetings, discussions, and problem-solving. This impartiality is especially beneficial during internal decision-making processes, such as deciding executive pay for senior company members. By remaining out of the day-to-day goings on of the company, it’s easier for non-executives to see the bigger picture when making important decisions.

Their goal is to offer guidance and insight to the rest of the directorial team, but also to hold the board to account and challenge them when needed. Additionally, depending on the industry, a non-executive director will sometimes act as a networker, helping to build relationships and find new opportunities and contacts. As such, candidates for this role should have extensive skills and expertise relevant to the industry, experience in managing a commercial company at the highest level, and strong interpersonal and communicative skills.

A non-executive director can be appointed across a range of different industries and organisations, including:

According to the UK corporate governance code, at least half of a company’s board (excluding the chair) should be comprised of independent non-executive board members. This ratio helps to ensure it’s well-balanced, and that independent viewpoints are well-represented.

What does a NED do? 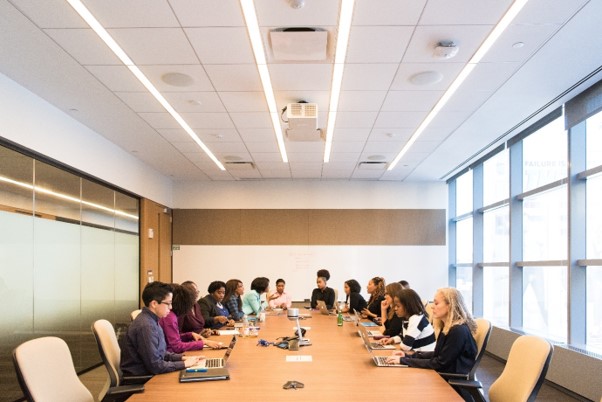 A NED will be expected to bring their own specialist expertise and insights to the boardroom in order to benefit the company as a whole. The role of a non-executive is to guide and influence the board of directors by sharing your knowledge, experience, and skills, both during and outside of board meetings. At times, that might mean questioning or challenging an executive decision, and ensuring that everyone has considered an issue from every angle before any key decisions or votes go ahead.

What’s the difference between an executive and non-executive director?

The most crucial difference between an executive and non-executive director is that a NED won’t take part in any operational activities or oversee the day-to-day running of the business. Instead, they attend board meetings and provide support and insight to the other executives to help assist with any issues.

In addition to this, a non-executive director might also be tasked with:

A NED will usually have rather different working hours to those of a full-time executive. NEDs will be expected to attend important board meetings and to communicate with the rest of the executive team on a regular basis, but exactly how many hours a month this will entail will vary between positions.

While there’s no set number of working hours, candidates can usually expect to devote at least a few days a month to the role. This time will be spent advising other board members, as well as preparing for and attending board meetings. A NED will be on call more or less all the time and may need to come in for emergency meetings at short notice.

The workload of a NED will also vary. They might work several days non-stop in one month, and then just a few hours the next, but the salary won’t change to reflect this. Many NEDs will hold down several non-executive positions at the same time and may even have a part- or full-time job, too.

NEDs and the law

While the role and day-to day activities of an executive and non-executive director might be rather different, UK law doesn’t distinguish between the two. That means that NEDs will have the same legal duties and responsibilities as any other member of the board, and must behave according to regulations set out in the Companies Act 2006.

This means that a non-executive director needs to be diligent in their duties and always act in the best interests of the company. They’ll be held to the same standards of corporate social responsibility and must take personal liability for their own actions in the role. As such, they will need to show the appropriate level of care and diligence that would be expected of any executive and keep a record of any precautions and actions taken to that end.

Because non-executive directors have the same degree of liability as executive directors, they can be held accountable just like any other member of the board should something go wrong. So, there can be quite a lot of responsibility on their plate, even if the working hours are much less than for a full-time position.

Non-executive director pay: what to expect

The remuneration for a non-executive director depends on the scale and structure of the business in question. According to the Institute of Directors, NEDs at smaller companies can typically expect to earn anywhere from £15,000–£25,000, depending on their experience and the level of involvement expected of them. At SMEs, this figure rises to around £38,000–£40,000, while a non-executive director at a FTSE250 company can receive anything from £40,000–£60,000. Some top-level non-executives at the highest level in FTSE100 companies even reported earnings in excess of £100,000.

In short: non-executive directors’ pay is generous relative to the number of hours actually worked, reflecting the extensive experience and expertise demanded by the job. However, for most NEDs, the salary is merely supplementary to their existing savings or income. Some non-execs will also hold multiple positions, giving them more than one income stream.

For many, the main attraction of taking up a non-executive position is that it’s a good way to gradually scale back from a full-time role to only working a few days a month before retirement, while still receiving an extra income.

How to become a non-executive director 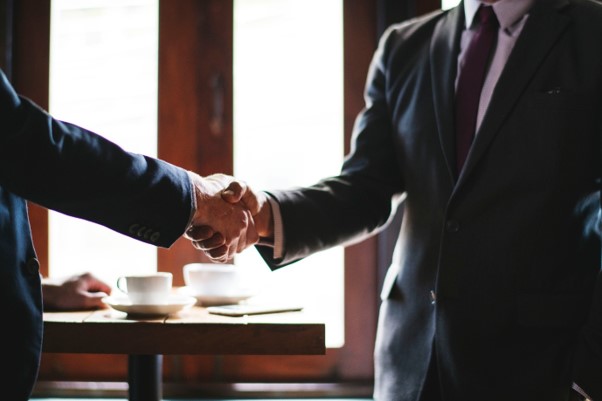 As a member of a company’s board, being a non-executive director means taking on a lot of responsibility, so highly skilled candidates with lots of commercial experience and a proven track record are in high demand. But, as the job usually only involves several days’ work a month, and the remuneration is often very generous relative to the number of hours worked, these roles are highly sought-after and very competitive.

Here, we’ll discuss the sort of skills, experience, and personal attributes that you’ll need to successfully secure a role as a non-executive director.

Most NEDs will have prior experience as a Chief Executive or in an equivalent high-level role and will have the skillset to match. They should be able to solve issues concerning the structure and finances of a business at the highest level, as well as advise on mergers, acquisitions, and policy planning. They will also need to ensure that executive directors and other board members are behaving in a manner which is ethical, responsible, and inline with the best interests of the company. As such, a candidate will need to have a detailed knowledge of corporate best practice.

Other skills which are likely to make you a very attractive candidate include:

When hiring a new NED, a business will usually seek a recommendation from an associated advisory body in their field or use a professional recruitment service.

The ideal candidate for this role will have substantial experience in the commercial private sector and, in particular, they should have experience managing and creating policy for large or complex organisations. So, if you can prove that you have experience handling acquisitions and mergers, or that you’ve dramatically benefitted a company or organisation in the past, then boards will be much more likely to consider you for the role.

To get some experience, you could also consider working as trustee. Many non-executive directors cut their teeth in the charity sector, and this is a good way to transition from a day job into a more directorial role. Lots of organisations within the public sector — like housing associations and health trusts — are also keen to take on people with related commercial experience, so this can be a great start.

Although the pay for these roles is often less than you’ll receive as a non-executive director at a commercial company and you will usually need to put in more hours, taking this kind of role is a great way to gain some experience, and can be very rewarding in a different way.

While having the relevant qualifications and expertise is important, it often takes more than this to successfully win the role. A good non-executive director will also need to possess excellent interpersonal skills, and an ability to manage issues with tact and diplomacy. A NED should be prepared to hold the board to account, but without ever being too domineering, so it’s essential that you have the communicative skills to provide constructive criticism in a clear, non-confrontational way

The success of the company will hinge on your ability to work as an effective and entrepreneurial member of the company’s board, so you’ll need to be prepared to work collaboratively and not be egotistical or domineering in your approach.

You’ll spend a lot of your working hours advising and guiding other executive directors, so it’s also essential that you’re willing to be generous with your time. This might also mean being called in to work at short notice.

Being appointed as a NED

Because non-executive directors aren’t technically employees, there isn’t a traditional employment contract. Instead, you’ll be given a template Letter of Appointment upon accepting the position. This will outline:

We hope that this has given you a better idea of what a non-executive director is, and the experience, skills, and characteristics which are required to succeed in the role. Here at Edward Reed Recruitment, we specialise in finding the best candidates for both executive and non-executive candidates across a broad range of industries. So, whether you’re an experienced professional looking to progress your career with a new job, or a company seeking candidates for a new director position, we can help. And, in the meantime, you can always keep up with the latest news from the world of professional recruitment on our blog.

What to look for in a job candidate:...

So, you’ve scoured the applications, read countless CVs, done your…

Questions to ask in a job interview

So, you've charmed the panel with your small talk, nailed…

Even just a few years ago, the prospect of taking…